RESVERADERM Serum is formulated with a powerful antioxidant cocktail with Red Grape's Resveratrol, Hyaluronic Acid, Epigallocatechin gallate, and Idebenone that helps protect the skin from environmental aggressors such as stress, fatigue, pollution, blue light and the oxidative photo-damage due to the overexposure to Ultra-Violet Radiation.

Free Standard Shipping on orders over $120

This oil-free, powerful Serum is formulated with a blend of the most powerful antioxidants encapsulated in liposomes that work in synergy to promote skin's natural production of collagen and elastin, thus helping to achieve a more plum, firmer complexion. The formula is further enriched with natural peptides, Retinol, and Quercetin, a potent flavonoid from the group of polyphenols that helps protect the skin's natural antioxidants from depletion caused by UVA irradiation.

Apply RESVERADERM facial serum with a gentle massage, all over the face, neck and décolleté. The right amount is 4-6 drops, to spread evenly.

You can use it both in the morning and at night.

Combine it with your usual beauty routine, always on clean skin, just before cream textures. And don't forget to use sunscreen!

Resveratrol: It's a natural and powerful antioxidant found in grape skin, peanuts, berries, and even dark chocolate. Researchers claim that resveratrol molecule activates sirtuin (longevity proteins) Resveratrol has been shown to protect against oxidative damage caused by ultraviolet radiation and stress.

Epigallocatechin gallate (EGCG): It is a catechin and an abundant polyphenol in green tea. Research published in the International Journal of Molecular Sciences indicated EGCG as a cosmetic ingredient shows positive effects on skin hydration, moisture retention, and prevention of wrinkle formation, in addition to radical scavenging activity and reduction of melanin generation.

Idebenone: Widely used in the pharmaceutical industry Idebenone is defined as a synthetic equivalent to Coenzyme Q10, because of their similar structure and potent antioxidant properties. However, Ubiquinone, has a lower molecular weight and is presumed to penetrate the skin more efficiently than its parent compound.

Quercetin: It is a plant flavonol from the flavonoid group of polyphenols that helps protect the skin's natural antioxidants from depletion caused by UVA irradiation.

Complete your routine
You would also love 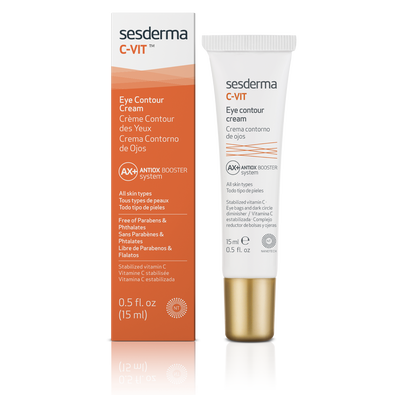 C-VIT Eye Contour Cream 0.5 fl. Oz Moisturizes and tightens your skin while diminishing the appearance of wrinkles and lack of luminosity.
$ 38.88
QUANTITY